Blue Donut Studios worked with Eastleigh Borough Council to create an AR Exhibition and multimedia heritage project called The Road to Agincourt.  The project commemorates the 600th anniversary of the Battle of Agincourt and the Southampton plot. The plot was a plan to overthrow King Henry V by his cousin and close allies.

Activities take place over 2015-2016 across Hampshire in the UK. As part of this project we have developed a content managed website, a wearable A.R. Map and created a A.R. travelling exhibition.

Eastleigh Borough Council asked us to develop the AR exhibition to support a specially written play called ‘Across the Dark Water’, written by the acclaimed playwright Ben Musgrave. The exhibition travelled to various historic locations as part of the project. 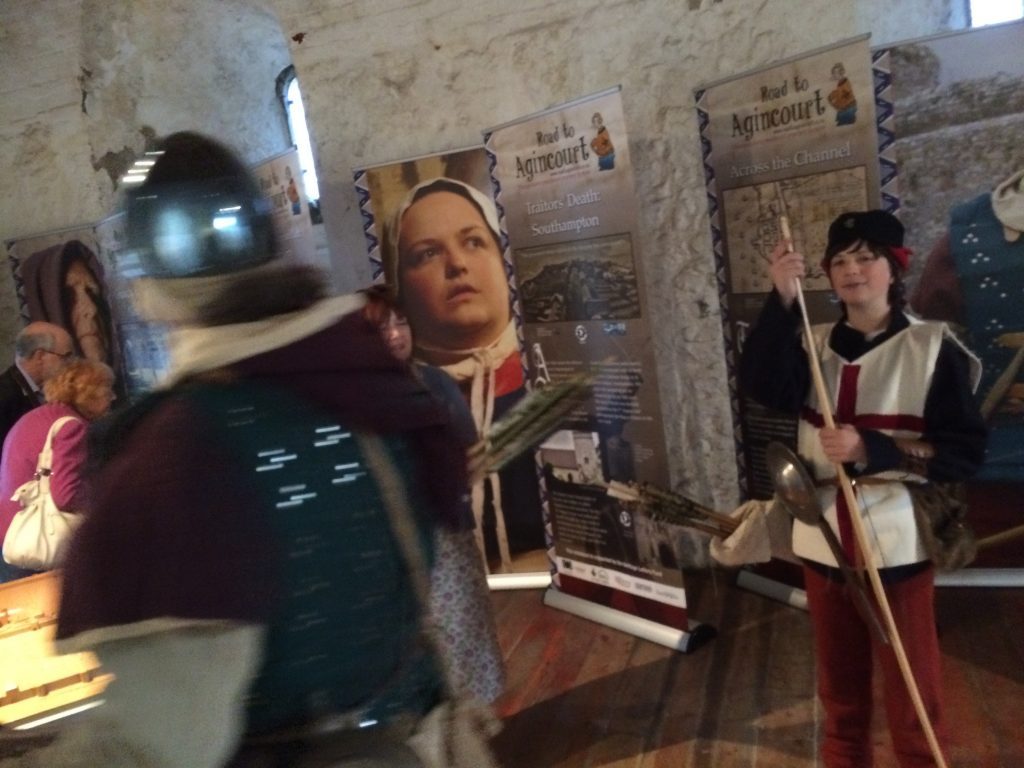 The Road to Agincourt travelling AR Exhibition at Portchester Castle

The exhibition is made of a series of 11 display panels that have animations, audio, films and links to online content. Visitors can use their own mobile phones to scan the A.R. beacons and activate the content without the need for special equipment.

Our AR exhibition presents a series of short stories about the locations recorded as places visited by Henry V that led up to both the Southampton Plot and the Battle of Agincourt. Each exhibition display contains augmented reality content that adds a dynamic range of animations, films, performances and other digital content created specifically for The Road to Agincourt.

The Deeds of Henry V

The cast of Across the Dark Water and actor Samuel West recorded a series of voice overs that accompany animations we developed and then used online and in the exhibition. The Deeds of Henry V document important dates and events in the run up to the Battle of Agincourt in France in the 15th Century.

The Battle of Agincourt

Each time a visitor interacts with an AR exhibition panel data is recorded for each location and panel at an event. This data helps to build up a picture of what audiences are interested in and it also tells us where people stopped to scan a particular piece of content on panel. This helps to then develop future exhibitions and digital content.

The data can then be used in a range of data exploration or analytics tools.

The Road to Agincourt project is supported by the Arts Council England, the Heritage Lottery fund, Agincourt 600.

Get in touch with Blue Donut Studios to discuss our A.R. solutions for exhibitions, events and historic sites.

Augmented Reality for Exhibitions and Wearables