This article explores the importance of storyboards for film and TV and pop videos planning and production. Blue Donut Studios worked with LoveLove Films, to develop a successful Storyboard for Joss Stone’s ‘The Love We Had’ pop music video.

Our client, Joss Stone has an incredible career that produces hit after hit. Joss is recognised globally as a star performer. Blue Donut Studios was asked to produce storyboards for developing a clear vision of a powerful story for the song’s pop video. We had to work fast and get creative! The brief was to develop a clear look and feel that would not cost the earth. It was important that we captured the needs of the director, the director of photography, the writer, and most importantly of all Joss Stone as each had different objectives to make the video successful. The storyboard became the ‘blueprint’ that the production team could work from. Our storyboards had to bring the powerful talent of Joss Stone to the screen. The completed video of The Love We Had has had over 9.9 million views on YouTube and has have over 10 million views on Vevo.com alone.

The storyboard for Joss Stones’ video Below is was made up of many pages like the example below. Panel ’11’ of the page below show the idea of a cat walking into the scene. The cat concept was one of many ideas developed with but was ultimately dropped from the final production because it either didn’t server to drive the story forward or it was too difficult to setup.

Storyboards are used in a very iterative process for story development and are used in the production. A finished story script and shooting script can be clearly demonstrated in good storyboards . Our storyboard artist was part of a writing team and worked closely with the director. This allowed the team to test story ideas quickly. The logic of the created world within a script and the written action for the characters was visualised by the storyboard artist. This avoids expensive and unnecessary re-shoots.

Why have a storyboard?

A good storyboard will explain what happens in the script and also gives production crews an indication of action and story flow. It will help plan shots and become a blue print for production to refer to. A great storyboard excites the eye and creates emotion; selling the story to everyone. What works on the written page in a script in a few words can have major implications for film production. This applies to films TV, games, videos, multimedia and VR. The storyboard artist will visualise visual FX, sets, action and even lighting. Something that’s easy to write and draw may suddenly cost a fortune in CGI, wardrobe and set building. It’s important that the storyboard artist can prepare the production crew for what happens in each shot, in every scene. Storyboards with shooting plans will show everyone how this is going to work on the screen.

The development of scripts and storyboards can often go hand in hand. Blue Donut Studios and LoveLove Films had several story meetings looking at story and how shots would work. Our storyboard artist worked with the director, script writer and the producer to sketch out concepts for the story. In the case of ‘The Love We Had’, the story was of a woman haunted by her memory of a past relationship.

The World of the Room: Planning out the shots

All of the actions within ‘The Love We Had’ is in one location: the flat. We used the living room, the kitchen, the hall and the bedroom. All of the living spaces needed to be connected logically in the story. We had to define with the director the camera placement for each of the various shots we wanted to make in our storyboard. The storyboard artist captured what the director wanted to happen in each key shot.Therefore, the crew were then easily able to collaborate by working from the storyboard as well as the script.

Example of considerations to check when developing shots in a storyboard: 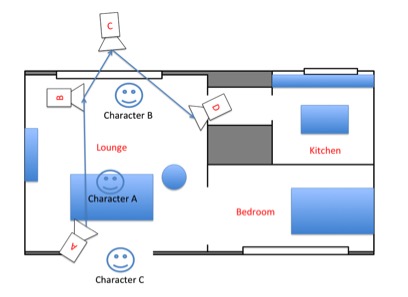 The diagram above shows the cross over of actors on the screen. Characters in a scene should not suddenly swap places on the screen. Be clear about why something moves from one shot to another otherwise you will confuse the audience. Characters also shouldn’t switch positions in mid dialogue.

It’s important to establish in each shot where objects and characters are. This is known as ‘Continuity‘ and it’s important because it keeps the viewer focused on the story rather than being distracted by errors. Even at an early stage, it’s important to considering what could be changing from shot to shot. Storyboards set out where people need to be clearly. The production and set designer can use a storyboard to work from and the director can decide what shots they want to use. DOPs (Director of Photography) using our storyboards are able to easily establish what camera lenses and setups will bee needed for a shot. By working with the director, our storyboard artist quickly establishes what the writer and director envisage. The storyboard visually communicates the plan to the rest of the production team.

The benefits of using a storyboard for film and TV production

The storyboard artist does not decide the visual design of the film. Instead, the artist will get a feel of the script and the instruction of the director to tell the story on screen. Listening is very important part of the process and talking to the director and scriptwriter(s). Our storyboard artist works hard to capture the nuances of the script. This helps storyboards to better illustrate both director’s and script writer’s intentions.

Understanding the language and process of film production and designing for the screen is vital. Storyboards can make the difference between an average visual representation and an exciting screen composition. A great storyboard will takes the script’s heart and soul onto the screen!